Now that the sale of Gala Casinos is on the cards I asked some one who worked at both  Stakis Casinos and Gala Casinos to put together a brief story of how they became Gala Casinos Group, as soon this may be the end of Gala as we know it today

Stakis opened Scotland’s first casino, the Chevalier, in 1964 and gradually added several other casinos to the Stakis group. The Chevalier was an immediate success, the first of an eventual chain of 22. He finally decided to sell his empire which consited of, 54, four-star hotels, 22 casinos and 70 health clubs to Ladbrokes in 1999.

Ladbrokes did not keep the casinos very long at all but in this short period managed to send out quartley staff magazines along with producing there own training money with Ian Paynes (MD) face replacing that of the Queen (Has anyone still got a copy ? would love to see it again) 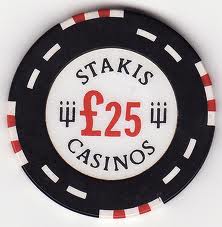 Gala aquired the ladbroke chain of casinos in December 2000 and at this time consisted of  27 UK casinos, plus one each in Gibraltar and the Isle of Man, to its portfolio of 175 bingo halls around the country

Cinven and Candover both private equity firms acquired the group for some £1.24 Billion

A third investor, Permira bought into the group (at this time net worth was estimated at £1.9 Billion). In October of this year they made a major investment and took ownership of Coral Eurobet which then pushed the value of the whole group to soem £4 Billion.

Commenced the roll out of betting shops in Italy, totalling some 403 horse racing and sports betting licences

Rank Group to buy Gala Casinos  , who knows the next chapter

The source of this story added

At the time Stakis was acquired by Gala a sense of personal pride and loyalty towards Sir Reo was abandoned, it seemed that we were no longer part of an extended family and we were just  employees who clocked on and clocked off each day with a sense of going through the motions. The management had money to spend when the private equity firms  invested, and spend they did, sometimes needlessly. It was like kids in a candy store and what was once so precious under Sir Reo became almost extravagant as they thought they had a bottomless pit of money to spend

It seems that they have had an eventful and chequered history under the many investors, Will Rank/Grosvenor give them the stability needed for a long term growth?

The Source of the story wishes to remain anonymous . The person worked with both groups for many years starting part time and eventually working at head office and management level. They no longer work within the industry but follow the ups and downs of life in the casinos with fond memories.

Have you worked for both Gala Casinos and Stakis ? or even for that short period of Ladbrokes, have you a story to tell ! Please do, send your stories in

There is one or two pieces of the puzzle missing, please feel free to fill in the history of Gala, .